I watched the movie “1917” the other day, and it sure was impressive.  The long one takes reminded me of the stuff I tried (horribly) to do back in the early 2010’s.  Hard to believe that was 10 years ago.  At the time, there were no small electronic gimbals that could stabilize a phone.  No, back then for normal folks there was really only the Glidecam and the smaller more portable Steadicam Merlin.  I got the latter, and I remember that it took me close to two weeks of fiddling with the old world physics problem of trying to balance a 5D mk II and 24-105mm f/4 on it.  I never quite got it even close to 90% perfect balance, as every single time and occasion it was finnicky, but I still enjoyed learning to use it.

My last post was random animated gifs, and it led me to pull some old Steadicam Merlin shots from “work” stuff and fun stuff.  The gimbal I have for my phone makes things infinitely easier and brainless, to the point where you can hand it off to a wedding guest and anyone can get you some good bts stuff.  But there’s still something about the analog solution in a digital world.  In looking at my old stuff, there’s still a coolness about the way a person with a normal stabilizer can swoop past a person and they seem like actors in a movie being played out before your eyes.  Yes it’s not perfect (definitely operator error on my part) but there’s not as much robotic perfect feel to the stabilization.  Plus almost all of these are one takes, no redos.

So here are some examples of my old awful amateurish footage from over 10 years ago:

From a wedding in Augusta. In addition to one or two still cameras on me, this 5+ pound rig was pretty burdensome. There was a gap in the door right before the bride making her big entrance and I thought it would make a neat clip.

Running through the field with a friend. This patch of the park hasn’t had rice planted in a long time.

From a wedding in Atlanta. The freedom to try and “fly” this thing through random things was new and novel at the time for me.

From a wedding up north. One of the advantages of the Merlin was that it folded up like a caliper and didn’t take too much room in the bag. In 2011 gimbal stabilizers did not even exist and smart phones definitely were not the video powerhouses that they are now in 2021.

One advantage that it still has is that the device only runs on human power. Once it’s somewhat balanced, it’s ready to capture real moments as they are happening. The control mechanic for it isn’t the joystick mechanism like on a modern gimbal, it relies on slight nudges with your off hand. One thing that caused me much grief back in the day was the mounting plate covered the battery for the 5D. In order to change it I had to disassemble the whole thing.

This was a lovely quiet moment that I got to be a part of.

Walking backwards without any help was definitely a hazard back in the day. I still remember bumping into a few people back then. 🙁

One take. No redos.

This studio in Atlanta was the unique location for this wedding. It had a freight elevator and I thought it would be a cool shot for me to be in there with them getting a follow shot. Still get stressed out over the wobbliness of the whole rig and the focusing. Did I mention that this generation of DSLR’s had no fast live view autofocus tracking. No, I just had to shoot aperture priority and lock it to about f/8 and keep the distance to subject constant.

This might have been right after I got the Merlin balanced a decent amount. This is me running on foot at the local skate park.

I still remember the slight dip and duck that I have to employ when walking backwards with this rig. 24mm is a very good focal length for it.

The rig just had a way with unscripted pass throughs, making almost every seem like actors in a film.

Even used it for a mock MTV reality show type of one shot.

I forgot about this clip from covering a weapons training workshop. The steadicam merlin when balanced is still very susceptible to wind and even the sound waves from the rounds going off.

Definitely a long time ago, back stage before the concert and fashion show. This Steadicam Merlin was probably 4th option in the bag and I just felt like trying it out. Still feel like we could have done so much more back then. I think the goalposts for what it means to be a decent professional in any field is constantly moving and always just that much farther on the horizon.

So yeah, that’s some clips from an incredibly quirky and finnicky device from “back in the day.” Might be amateurish on my part, hey I was/am still learning, but at least I hope the emotions captured are pretty real.  As they happened. Much like life and adventures back then. They just happened. 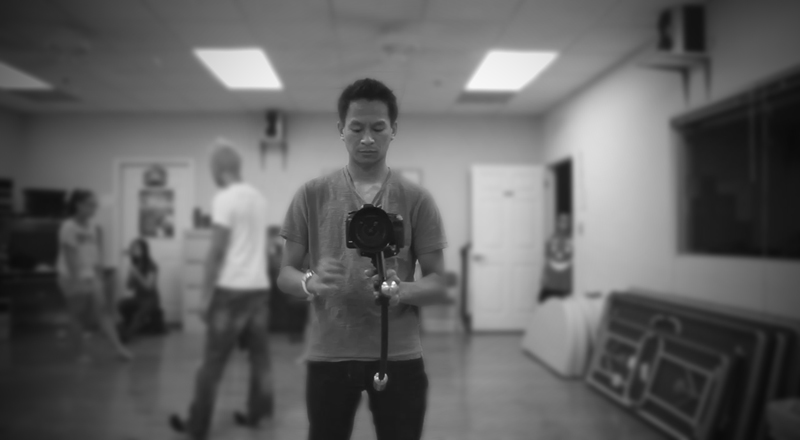 Me and the Steadicam Merlin back in 2012? I think. These days you can get a stabilizer for your phone for less than $100. This thing costed upwards of $500 I think. Heck it might have been more. The relentless march of technology definitely does not make me miss the setup time for this rig, and the 5+ lb weight of it.  Today this device sits in the closet.